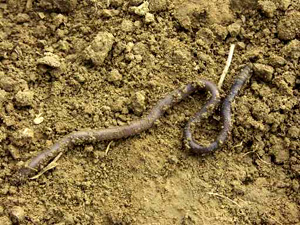 Earthworms are a very important part of the soil ecology

I recently ran into an interesting phenomenon that might be of interest to many of you, especially those of you who use night crawlers for fishing. I was at a hog farm checking the chlorine level of the farm's well water and observed that when ran the chlorinated water out onto the ground, the night crawlers came wriggling out of the ground very rapidly. The owner told me that he has used this method of catching night crawlers for years.

I find this very interesting since most fields under current cultural practices have few or no earthworms. I know now that the use of potassium chloride drives them out and if that doesn't get them, the anhydrous ammonia does.

Earthworms are a very important part of the soil ecology and are very helpful in the breakdown of organic matter. Earthworm castings contain higher levels of calcium, nitrogen, phosphorus and potassium than the surrounding soil. The castings are readily available plant food and help greatly in improved crop growth.

The earthworms' burrowing activities increase soil porosity, aeration and drainage, a much needed condition in most soils. Earthworms can burrow several feet deep in fertile soils and can break up hardpan layers. I would think that this would be a much more economical way to improve soil crumbing and tilth than tillage practices that require a lot of power and big equipment.

I find it very disturbing to attend seminars and read publications that encourage the use of big V-rippers and other mechanical devices to loosen and aerate soil when much less costly methods could be used.

Earthworms, like other animals, need calcium, so it's important that calcium is available for good earthworm propagation. Calcium also contributes to good soil structure as well as aeration. One of the quickest ways to loosen a tightly compacted soil is to introduce calcium sulfate into the soil. I had a field locally a few years ago where we added 500 pounds per acre and saw a dramatic improvement in soil tilth. The yield response was also gratifying.

A significant increase in earthworms was also noticed on this ground, which helped loosen the soil more. According to research, high fertility soils can have worm counts of over one million per acre. It's estimated that this level of worm population produces over one thousand pounds of animal residue per year and produces fifteen tons of castings per acre per year. The problem is it's estimated that most soils don't even contain fifteen pounds of worms per acre. No matter how you look at it, earthworms can be a valuable asset in a soil fertility program.

It's very important to learn to work with all of the soil microorganisms, not just part of them. Each type and species in the soil has a specific function, some of which we don't understand but yet they are important.

The real question becomes how do we grow commercial crops on soil and yet not drastically disturb the soil ecology. I am not sure we know how to do this completely, but I think there are some ways which are better than others.

I have been doing a lot of airplane flying and speaking lately and no matter which direction I fly from my home I see hundreds and hundreds of miles of barren land that have no protection from the elements. It wasn't too many years ago that at least part of these acres were in grass, hay crops and small grain stubble, which helped protect the earth's surface from wind and water erosion.

The biggest problem we have in the Upper Midwest is the soybean-corn rotation. The rotation may not be so bad, but the fertility practices that go with it are a major concern of mine. It is being suggested to this group of farmers that they use minimum tillage practices and leave crop residues on the soil's surface. This is not a bad idea on the surface, but when you look a little deeper it lacks some things.

The quality of the crop residues is so poor that the residues don't enter into a proper decomposition cycle. They just lay there without breaking down into humus. The residue is very low in simple sugars, so instead of decomposing into humus, the residue breaks down into an ash. The carbons present are liberated into the atmosphere without going through the carbon cycle in the soil.

Another problem with leaving residue on the surface is disease. Things like crop funguses, crop virus and insects are more easily carried over from one season to the next. If the residue decayed rapidly and properly this would not be a real serious problem.

Program to bring about changes on a soybean-corn rotation

How do we get a program started to bring about changes on a soybean-corn rotation? One of the simplest is to review your nitrogen application methods and procedures. If your area now requires that you leave your crop residues on the surface to protect the soil from wind and water erosion, consider the following: Spray each acre in the fall as soon as the grain is harvested with a dilute solution of liquid nitrogen, sugar or molasses, thio-sol and calcium nitrate. If possible add about one quart of liquid phosphoric acid per acre in mixture.

If you are fall spraying corn stubble ground consider three - five gallons of liquid nitrogen, two - three gallons of thio-sol and four pounds of calcium nitrate per acre. It's important that you have twenty gallons of total mixture, using water for dilution.

If this is not possible, several other products on the market may be considered, such as Nitromax with soil conditioner and liquid calcium. This combination can be sprayed on in the fall. Be sure to use a twenty gallon spray to get maximum effect.

I would also consider a product called residue treat, sold by IAT Products out of St. Joseph, Missouri. This product, properly applied, seems to have a powerful effect in getting a proper decomposition cycle going.

I don't think this fall program will be necessary once you get the brix readings on a refractometer about 12 during the growing season.

I am sure there are other products in the market place that can accomplish similar results. The big thing to consider in the end is - does the plan bring about a proper decomposition cycle, which will increase humus in the soil.