Every once in a while I am asked why should I bother to change my current farming fertility practices. I used to get pretty excited about a question such as this and would really light into a person. Then I realized they simply did not understand the consequences of their fertility practices. Now I like to take the time to explain the long term consequences of their actions. I also encourage them to start with small changes.

The need for reconsideration of fertility practices is best explained by the following case history. A friend of mine recently visited with a German farmer. He was spreading a lot of manure on his land which the American could not understand. The American asked how he could afford to do this. The German replied we cannot afford not to.

The German then explained how their soils have been farmed many more years than American soils, and that we, like them, would learn that there is nothing that replaces organic matter like good compost or manure.

Recently I received a soil sample from a farmer who has 2000 acres of ground in the upper midwest. On this ground he can hardly raise a crop of any kind. In fact, much of it is beyond economical crop production.

I ran a standard soil analysis and the results looked pretty good. Then we ran a Ergs test. The soil test is as follows:

The physical appearance of the soil indicated a tight, dense soil. The soil lacked granulation and organic matter. It contained a lot of clay and little or no sand. The ground has been heavily fertilized and finally reached the point where the crop residues appear to be converting to ash instead of humus.

The result of this is a very high ergs reading, indicating a very high salts content. When ergs readings get much above 1200 the plants roots are affected by dehydration unless plenty of water is available.

This particular field does not have irrigation, so it will be a real challenge to reclaim this valuable land. Some crops are more salt tolerant than others, but in his area the land is used primarily for small grain production. If the salts get too high the bark around the roots and rootlets separates damaging the plants transport mechanism for accumulating needed nutrients from the soil medium.

This problem is occurring more frequently across the main agricultural belt of the United States, which should have more people concerned. The problem is not addressed directly because these problems are often recognized as plant diseases rather than a salt build up and a decrease in organic matter.

For example, phytophroa root rot, mematods, root worms and various other parasite and fungal diseases often are the result of deteriorated soil structure. Excess salts cause plant roots and rootlets to crack, allowing parasites to enter through the openings. If these openings were not present the parasites would not be a problem.

Many people do not understand that many parasite diseases are caused by prior plant injury. This is due to salts and excess nitrogen rather than the parasites being the primary cause. The result is a whole system centered around using some kind of spray to kill the fungus or parasite rather than placing emphasis on improving basic soil structure with proper use of plant nutrients and tillage.

I recommended several programs or options to start a revitalization program for this farm. It is very important to understand the economics of your suggestions because the bottom line is still profit.

The first thing you do is quit adding high salt index fertilizers like 18-46-0 and 0-0-60. The next thing I would recommend is a soil conditioner with a little humate and energy source. I normally do not like to use soil conditioners, but due to the circumstances and soil analysis I feel it is appropriate. The nutrient levels are adequate according to the soil analysis.

The first problem to work on is soil aeration so we can increase bacterial activity. Tillage, along with a soil conditioner, will help get biological life going in the soil. One must always keep in mind the necessary requirements for soil micro-organisms. Soil micro-organisms need air, water, energy, calcium and phosphorus as major needs and trace elements as minor needs. Many people apply bacterial products to soils with no results because one of the majors is missing. 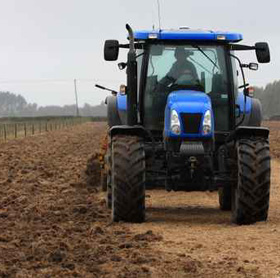 I feel this soil is missing two components in the major group. These are air and energy. Energy is sugars, carbohydrates, cellulos lignins and oils. The energy sources come from crop residues properly incorporated into the aerobic zone of the soil. I often recommend adding energy sources to increase the speed of recovery in poor producing soils. I like to use simple sugars, syrups, molasses, wheys, concentrated seaweed compost and manure blends. I try to fit one of the above into my planned program that best fits the economic situation.

All of these products are energy sources that can help stimulate microorganisms to convert insoluble soil minerals into available plant minerals. The activity of microorganisms in the soils produces carbon dioxide as a by-product which combines with water forming carbonic acid which helps solublize soil minerals for plant use.

I would use a soil conditioner along with an energy source to increase air and reduce surface tension. Soil conditioners speed up this process allowing more air to the rootlets and soil micro-organisms. Soil conditioners mellow a soil making it easier for plant rootlets to spread through the soil. The easier the rootlets can spread throughout the soil the easier it can pick up needed nutrients. The easier a plant can pick up nutrients the faster it can grow. The more plant rootlets spread throughout a soil the more future plant residue will be left to break down into plant food for future crops. The more a root system spreads the more the soil granulates the more the soil water holding capacity improves.

If you watch your soil and understand how it functions, the easier it is to take the proper steps to improve your farm. Each soil is different and what works for one soil may not work for the next. Many soils need calcium, but this one I feel does not. Some soils need drainage and another may not. This is why it is important to understand the proper steps to correct your soil. This is also why a soil analysis, crop history, past tillage practices and plant fertilizers used are important.
I suggested two programs for this soil.

Gypsum is used to mellow and aerate the soil along with the RL-37 which contains sugars, humates, enzymes and allows surface tensions to reduce. The gypsum neutralizes the effects of salts which should speed up the correction process.

This program needs to be done three-times and ten-days apart change in the soil structure.

Neither one of these plans will work very well without adequate water. I think there are other choices which could do just as well. Lets consider a green manure crop which seems to grow well under very poor soil conditions - mammoth red clover. It is quite tolerant of a tight compacted soil. The root system would provide some nitrogen and aeration to the soil, and working the growth back into the soil would help soil structure. Wheat grass works well as a green manure too, but in this case wheat already has problem of establishing.

If you watch your soil and understand how it functions, the easier it is to take the proper steps to improve your farm.

Compost would also be in order here, but this farm is some distance from known sources. It is very possible that there is organic residues that could be composted in this area but it would take time to develop and spread. I believe the two programs I have suggested will get him started in a soil rehabilitation program.